Oil prices – are we there yet?

There has been much comment and speculation about the oil price; its past and future, its market forces, etc. Obviously the price matters – for Oil & Gas companies it is the cornerstone of their existence.

What has been good for end consumers at the same time has imposed penalties on the industry, reducing new development projects. This will mean less jobs and less tax, which will be bad for the country. There are many details to fully understand the consequences of low oil prices, which vary from country to country. What is clear is that this is not only today’s reality but also a concern for the future. In the long term what matters most is to build a sustainable method for the optimization of running costs and the allocation of resources, just as other sectors have been doing. We have seen up and down cycles many times and should have learned to be prepared. In the next 30 years it will happen again a number of times.

The most capital intensive activity is related to E&P, finding reserves, confirming the value and building the infrastructure to finally produce from such reservoirs. In order to be more efficient there is a need to identify where the expenses and revenue are heading. In terms of CAPEX it is difficult to reduce costs as they are less sensitive to a price drop due to material costs, time to build, etc.

The natural place to look is in OPEX, where we can revise all processes and try to streamline them; making them shorter, faster, cheaper, etc. Over 50 years Deming developed a simple system, which was a revelation for Japanese auto manufacturers and became their way of improving their processes. The original simple method was using PDCA (Plan, Do, Check, Act), which are the four basic stages of the operational process, as shown in the figure below. 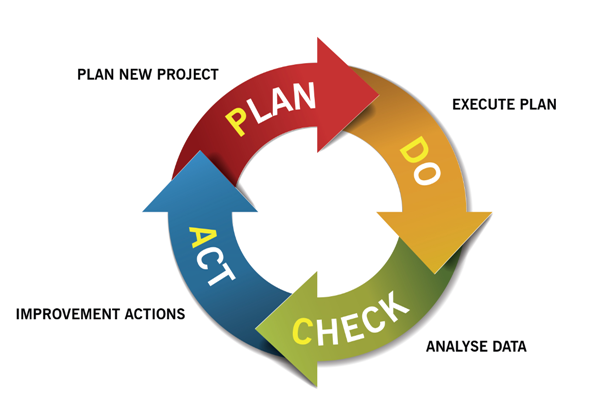 PDCA was created by W.E. Deming (link to http://en.wikipedia.org/wiki/W._Edwards_Deming). It is designed to lead to continuous process improvement. Companies can use this cycle, for example, to:

Planning and Checking play a fundamental role in the drilling process improvement. When planning, operators can use historical offset data from wells similar to the new planned well. Most companies already have suitable data and the implementation of this process is quite straightforward. Setting KPIs, allowing internal and external benchmarking, recording lessons learned, among other simple processes, will assist in improving and streamlining well construction and ultimately save costs on the way.